Use of coal for generation of power has drawbacks. Mining damages our environment. Transportation of coal to power plants is expensive. Ash byproduct must be stored.

Humanity will need (and will get) much more electrical power.

Humanity continues to grow in population, and wants to eliminate poverty. Much more electrical power must be generated. Despite coal’s drawbacks, huge amounts of coal power plant are being built.

Environmental and health costs of coal are ignored partially or completely, so coal is viewed as the least expensive alternative for new power plant.

How Much Better Can We Make It?

I would like to know how much human cost can be avoided by replacing coal with another source of power.

Given time constraints, I have limited investigation:

Conclusions based on information on the United States can probably be generalized to the entire earth in a straightforward manner.

Health costs from waterborne pollution, and environmental costs, can be modeled using data sets outside my investigation.

Other replacements for coal (e.g., natural gas) have different costs, benefits, and drawbacks. Modeling these is more complicated.

My question focuses to:

How many lives can be saved by replacing coal generation for the United States with nuclear power?

Currently, it is estimated that air pollution from coal power causes thousands of deaths per year. Clearly, the sooner we start, and the faster we finish, the more lives we can save. Every year we delay starting costs these thousands of lives. Every year we spend partially completing the phaseout costs some fraction of those thousands of lives. This does not count deaths due to waterborne pollution or leeching of toxins from ash or sludge byproducts of burning fuel.

Coal-based generation of power has been a great benefit to mankind. But, burning coal has inevitable, baneful, effects on the environment and humans.

These include damage to ecosystems, heat and material pollution into waters, and emission of harmful gases and material into the atmosphere.

I examined only the emissions into the atmosphere, and modeled existing damages, which will be eliminated when coal-based generation is replaced. I model replacement using nuclear power, which completely eliminates release of pollutants.

Coal plants vary in the mount of coal they burn. They are clustered near rivers and the ocean. These should all be replaced with nuclear reactors, which release no toxins into air or water. 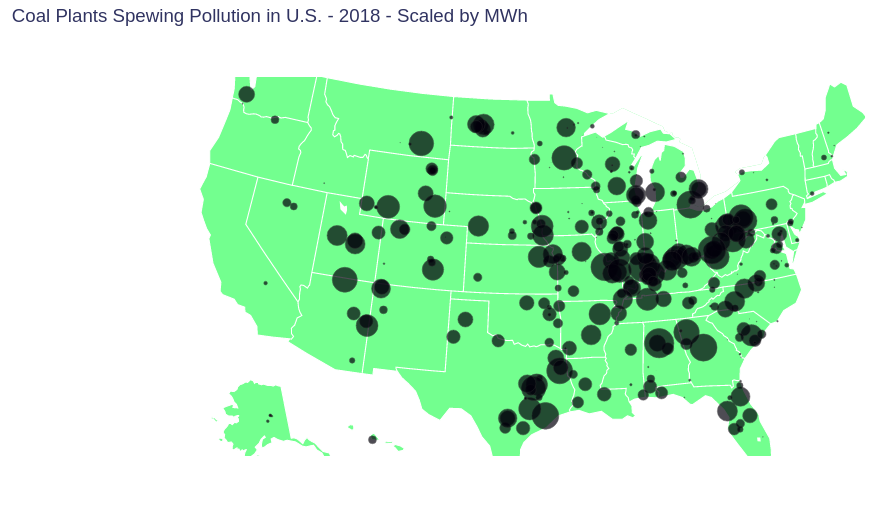 Most coal plants use less than one million tons of coal per year.

Currently, the fourth generation of commerial nuclear reactors is being designed. There is a variety of promising concepts. One commonality is that potential producers plan to build reactors that can be scaled from small (~200MWh (electric)) to large.

Replacement of coal plant should begin with coal plants that are smaller, as they are likely less efficient in terms of power produced per amount of pollution. 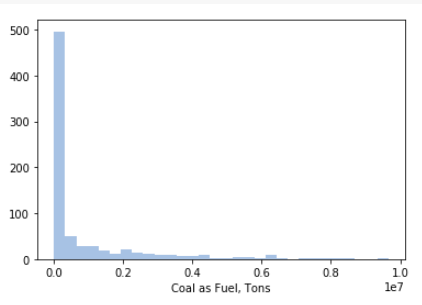 Airborne pollution from coal kills thousands of Americans each year.

Coal also damages our ecology and pollutes land and water. But, focusing on related air pollution, coal kills thousands in the United States every year.

Faster is Much Better.

The sooner we move from coal as a power source, the sooner we will save thousands of lives. Every year we have not stopped using coal power, humans are killed by coal air pollution.

Prioritizing Removal by Efficiency of Plant

Assuming that health detriments are related directly to the amount of fuel burned, less efficient plants should be converted to nuclear earlier.

By plotting calculating an efficiency metric (power output / fuel consumed), then plotting this versus power output, it becomes clear that less efficient power plants are smaller in power output. 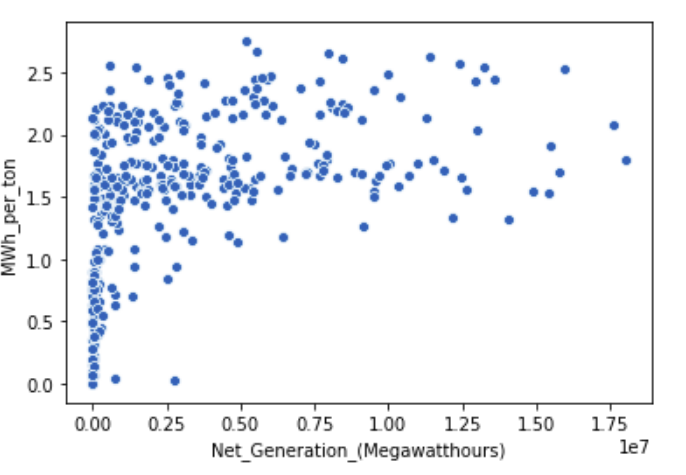 What differences between power plants exist?

I will search for more granular data about emissions of individual plants and prime movers, if available. This could help prioritize removal of coal generators.

What other damages does coal inflict?

I have not investigated health costs of mining and transporting coal, nor health costs related to coal ash and material released into waters. I suspect these costs are substantial, and strengthen argument for removing coal power plant.

How do other replacements measure up?

Gordon is a journalist doing fantastic work in producing video content about progress related to molten salt reactors. there is a lot here.

I think these are most likely to get there first because they have chosen to pursue molten salt without concentrating on use of thorium as fuel (I know, fertile not fissile).

Flibe Energy, led by Kirk Sorensen, is concentrating on designing and building a Liquid Fluoride Thorium Reactor (LFTR). Use of thorium, rather than uranium, as fuel allow for a further reduction in waste, and higher production of very valuable medical (and other-purposed) isotopes. https://flibe-energy.com/

My first essay at Medium: https://medium.com/@jud.taylor/coal-kills-52de7d9c863b

Their use of an Income Sharing Agreement radically aligns Lambda School’s interests with those of its students.